Call for Papers for the Journal Nokoko

Call for Papers for a SPECIAL ISSUE for Nokoko

* Reflections on being an “Africanist” scholar in the 21st Century: A Tribute to Pius Adesanmi 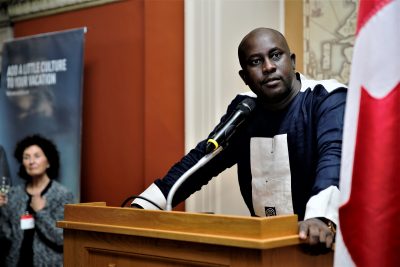 Nokoko is calling for submissions of original manuscripts that critically reflect on what it means or what it should mean to be an “Africanist” scholar in the twenty-first century. This special issue of Nokoko is dedicated to our friend, colleague, editorial board member, and Director of Carleton University’s Institute of African Studies, Professor Pius Adesanmi, who tragically died in the Ethiopian Airlines crash on March 10, 2019.  Given his varied academic and public intellectual dispositions and practices – his multiple interests, commitments and contributions as an academic scholar, regular columnist in Nigerian (on-line) papers, strong mentorship activities in Africa and North America, his artistic productions, an immensely busy schedule of public talks in Africa, Europe and North America, and his social media posts engaged with by tens of thousands of followers – we ask contributors to use Pius Adesanmi’s organic intellectual activism as a catalyst for thinking about the role of an institutional builder and public intellectual and an “Africanist” scholar in this century.

Rather than producing mere hagiographic tributes to Pius Adesanmi, we are looking for contributions that grapple with these topics as he did, Among his many interests, an abiding one for Adesanmi was the idea of an Africanist public intellectual whose engagements straddle the tensions and varied, at times contradictory, expectations of being an African scholar with the various racialized, colonial, national, and diasporic dynamics found in the different regions, universities, and publics of North America; finding and building pathways through a gamut of mediums to vocalize scholarly perspectives, social criticisms, and, at times, outrage, that facilitated dialogue and debate for different audiences and constituencies within Africa, including the elites and the subalterns. Other engagements include generating opportunities of training to strengthen the methodological rigour and abilities to both conduct excellent research in the humanities and social sciences and to share the findings in various formats to wider audiences among African graduate students and early career researchers – in other words, trying to widen the number of Africanist intellectuals and educators based on the continent.

Submissions should either explicitly reflect on the challenges, practices, limitations, and the future of being an Africanist intellectual in the twenty-first century or demonstrate it through analysing a specific topic or texts. In particular, we welcome submissions that engage with some of the many topics that Adesanmi did in his work as a scholar and public intellectual, including:

Pius Adesanmi was extremely dexterous in his productions and interventions, using all forms of writing and speaking, and thus we welcome a range of genres of writing to explore one or more of these topics – be they academic, social activist, or artistic.

First, we are asking for submissions of 200 word abstracts of potential papers by May 30, 2019.

The abstracts will be peer-reviewed and individuals who submitted selected abstracts will then be contacted by June 15, 2019 to go ahead and produce their full papers.

Your final manuscripts should be between 7,000 and 9,000 words. Articles should follow Nokoko’s submission guidelines. They will need to be submitted by October 31, 2019 for review.

Please submit your abstract to Nokoko@carleton.ca.